The benefits of the Cretan Diet

The traditional Cretan diet has the following characteristics:

Various ecological, socio-economic, cultural and religious factors contributed to the development of this unique Cretan diet.

The Seven Countries Study 1960 – by the American Ancel Keys 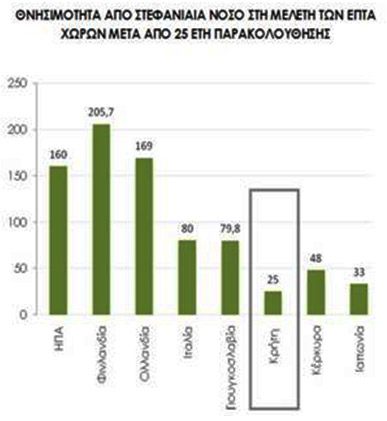 The Cretan diet’s connection with good health became widely known later on, with the Seven Countries Study. This study was begun shortly before 1960 by the American Ansel Keys and his colleagues, on the basis of the impressively low mortality rates and cardiovascular disease observed in the area. The specific eating habits that characterized this area were studied in an effort to explain the lower incidence of coronary heart disease and cancer, and the low mortality from all causes observed in the population of Crete compared to the other countries selected in the study. According to the United Nations, no other Mediterranean region has had such low mortality rates as Crete, both before and after World War II.

The study looked at a total of about 13,000 men selected from 7 different countries (Finland, the Netherlands, Japan, the United States, Italy, Yugoslavia and Greece) to investigate the then unclear relationship between diet and cardiovascular disease. Comparisons between the different populations showed that the population of Crete had the best health status and lower mortality rates from coronary artery disease and cancer compared to all other populations studied. After 20 years of follow-up, Cretans had the lowest death rates from all causes, and after 25 years of follow-up, coronary deaths in Crete were dramatically less than the deaths observed in the United States and North Europe, but were also lower in comparison with the deaths observed in other parts of southern Europe such as Italy, Yugoslavia and Corfu.

After the Seven Countries Study, French researchers Serge Renaud and Michel de Longeril showed in the Lyon Heart Study that giving the Cretan diet to patients with acute myocardial infarction reduced the rate of death at 27 months after the episode by 70 %, in comparison with the diet recommended by the American Heart Association. In addition, after 4 years, the Cretan diet was associated with a 56% reduction in total deaths and a 61% reduction in cancer incidence.

The role of fasting in the Cretan diet

The low consumption of food of animal origin observed in Crete in the Seven Countries Study seems to have been due to an extent to the fact that Cretans at that time largely followed the fasts dictated by the Greek Orthodox Church. During fasting periods (when consumption of meat and dairy products is forbidden), animal products were stored to be eaten at times when fasting had finished and this tradition, as well as contributing to  better health, was also important for ecological and environmental balance.

The Orthodox Christian tradition defines various fasting periods, totaling 180-200 days throughout the year. Consequently, there is a long period of fasting which greatly influenced the overall dietary intake and helped to detoxify the body.

Is olive oil more suitable for frying than other fats?

The answer is explained clearly, below …

Fry without guilt, safely and more economically with olive oil!

When frying food, olive oil increases in volume at high temperatures and therefor a proportionately smaller amount is needed. Also, less olive oil is absorbed in food than other fats, and it can be used again without causing peroxides and isomerization, which cancel out the beneficial effects on the metabolism as lipids.

Recommendation for a good temperature for frying: up to 180° C. The “critical temperature point”, is the temperature up to which the oil retains its essential components.

The critical temperature points of the main oils and fats are as follows:

Fats such as margarine and butter have a low critical temperature, and frying produces acrolein and other oxidation derivatives that are dangerous to health. Therefore, the myth that the seed oils should be described as light oils, suitable for frying, is not true.